What Have I been DOING?? 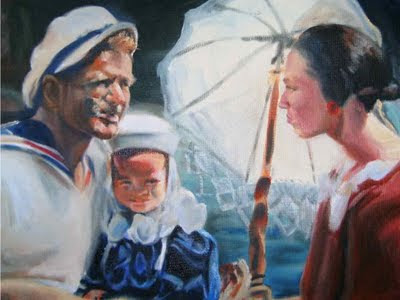 Hey, there cats 'n' kittens!
It's been awhile since I updated, but there are a few things in the fire right now.
First off, I won't be in the studio much because my wife and I are teaching at the Midland Center For The Arts Summer Art Camp just about every week this summer. Also, we're moving into a new place.
Secondly, I've been working with Anne Clayton, the OHHS art teacher, in building the "Youth Art Battle" for Downtown West Branch's "Fabulous Fridays" event "Art In The Street". Ages 6-17 create a piece of artwork in a 3 hour time period and the passers-by vote on whose work they like the most (it's broken up into 4 age groups) and the winners from each age group get prizes that local businesses and individuals have donated. And it's all free.
I've organized with the West Branch Library to have a "POPEYE" Day at the library on Thursday, July 7th as part of the West Branch Film Festival (formerly West Branch Children's Film Festival). The movie "POPEYE" will be shown for free in the library and I'll have my Popeye art series on display. I'll also be doing free Popeye sketches for anyone who attends.
I think that's all for now.
Posted by jasontheartist at 10:21 AM