I have alot of things I want to do right now. Here is a list:

-Do a documentary. Of me. Very arrogant. But honest.
-Have an exhibit solely of my Sammy Hagar artwork. Around the time and place he tours in Michigan.
-Set up an art show of the West Branch Artists' Pool in West Branch
-Organize a plein air in Irons' Park (on location art outing) July 26th with the Artists' Pool
-Do more shows/fairs/events
Posted by jasontheartist at 9:37 AM No comments: 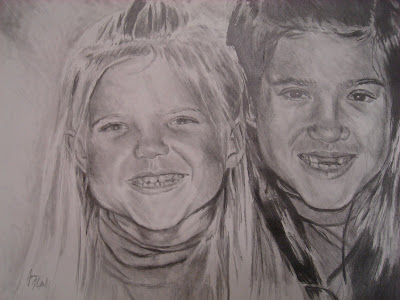 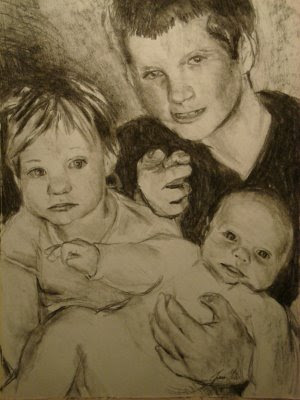 In the last couple months, I've offered deals for Mothers' Day and Father's Day. I didn't get alot of takers, but these drawings were done for Mothers' Day and Fathers' Day, respectively and one other drawing was done, but I accidentally erased the photo of it.
Thank you Mrs. Johnson and Mrs. Wilcox for allowing me to post the drawings.
Posted by jasontheartist at 3:17 PM 1 comment: 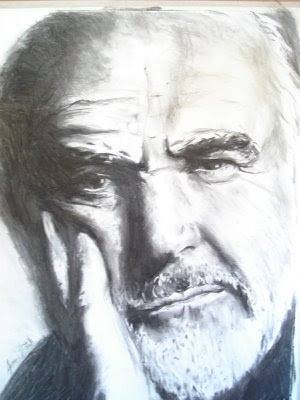 I just realized that I never posted the finished Sean Connery drawing from the Art de Combat II, so here it is.
Posted by jasontheartist at 3:14 PM No comments:

The photo is of me at the Art de Combat II, and behind me is my Uncle Bern Nuttall, whom I haven't seen in 25 years before Memorial Day last week. He came up just for the combat. Thanks again, Uncle Bern. 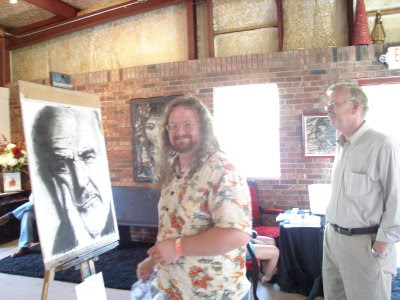 Here's a link to video of the Art de Combat II

Josh Jurgess filmed footage of the Art de Combat II at Enchante Gallery in West Branch, Michigan on May 30th. Thanks, Josh.
This was my first art battle, but I've grown very accustomed to drawing or painting in public, answering questions and talking to viewers. I actually enjoy it quite a bit. I didn't really feel any pressure after the first half hour. Like any project, I never know how it's going to go until I start. Starting is the worst part for me, because I need to figure out where to start. In this case, I didn't know what medium to do. I saw alot of painters competing, so I left the paints in the car. It wasn't until the starter shotgun (yes, you read right) that I opened up the charcoals and started. I went with a Sean Connery portrait, since he's a very recognizable, and fantastic, actor. If I'd felt confident I could finish the piece in the 3 hours, I would have done an oil pastel of a kilted Connery, ya know, for the ladies...
I want to thank those of you who came to the event, even if you didn't vote for me! The next combat at Enchante will be in October.
Posted by jasontheartist at 1:28 PM 2 comments: