Workin' for the Money

I did my 3rd "Hale Hot Air Balloon Fest Art Battle" yesterday, and placed 3rd and got the People's Choice award. This was a first, in that judges were selected rather than the general public buying tickets and placing their ticket as their vote for who they liked most. That's what the People's Choice Award was this year. Alot of battles are chosen by the public, which, in theory is a great idea. It can be fun and give the artists an idea of how their work is perceived by passers-by. HOWEVER, some artists will stuff the ballot box by getting every man, woman and child in their family tree and graduating class to stop by and vote for them (and if it's a case of buying a ticket for $1, some of those people drop $5-$20 and vote for their friend or relative, in spite of the quality of work being created on the spot). It becomes a popularity contest. Dave might have 7 votes, and one was from his dear ol' granny, but Chloe got 13 votes, and 7 of them were from her friends who came by. Dave and his mom eat beans at home while Chloe and her chums hit the Sizzler and shopping after with her winnings. I'm not saying this happened yesterday. I'm not saying it happened at any specific art battle, but it does happen and it infuriates the artists (especially when you lay down $25-$30 just to enter the battle and get bubckus for it). I've had long conversations with other artists who compete around me, and they felt the same way. However, I enter as many as I can, because my full-time job is that of an artist, and I do enjoy these events. It boosts one's self-esteem with the onlookers praising your work, even you don't like it yourself. I was interested to see the results with judges. I was told they had criteria they had to follow, like a grading system. So, here's the drawing I did (because Lennon sells). It's 18x24 charcoal. It was also part of the silent auction. I have yet to find out how much it sold for. 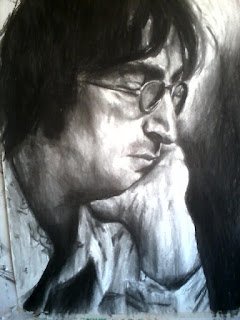 Posted by jasontheartist at 10:07 AM No comments:

You say you want a revolution, well, too bad. You get a drawing. 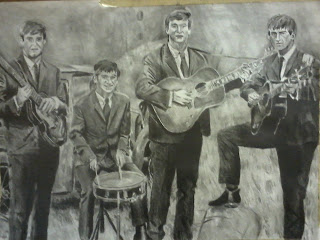 This is a graphite drawing I was hired to do of The Beatles. It's 11x14, which made the details in the faces PAINFUL to draw.

Posted by jasontheartist at 4:48 PM No comments: