I keep getting posts and updates about art competitions, but I can't enter them because they cost money and I have none. I haven't sold anything in too long and haven't been hired for anything in over a month. I'm 2 1/2 months late on rent. Things aren't looking good.
Posted by jasontheartist at 11:28 AM No comments:

This is #4 in my "Sammy Flyin' High" series (I still don't have a title for the series. It's Sammy Hagar jumping), roughly 36x48 and done in oil paint. It's not done yet, but there's not alot left to do. 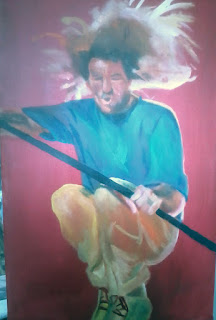 Posted by jasontheartist at 12:59 PM No comments:

What I'm down with

CosPlay (short for "costume play",[1] is a type of performance art in which participants don costumes and accessories to represent a specific character or idea. Characters are often drawn from popular fiction in Japan, but recent trends have included American cartoons and science fiction such as Disney.[citation needed] Favorite sources include cmanga, anime, tokusatsu,[clarification needed] comic books, graphic novels, video games, hentai and fantasy movies. Any entity from the real or virtual world that lends itself to dramatic interpretation may be taken up as a subject. Inanimate objects are given anthropomorphic forms and it is not unusual to see genders switched, with women playing male roles and vice versa. There is also a subset of cosplay culture centered around sex appeal, with cosplayers specifically choosing characters that are known for their attractiveness and/or revealing (even explicit) costumes.
Cosplayers often interact to create a subculture centred around role play. A broader use of the term cosplay applies to any costumed role play in venues apart from the stage, regardless of the cultural context.) in West Branch, maybe during one of the Fabulous Fridays events downtown.

Enchante Gallery Presents: Figure Drawing/Painting Workshop w/ Nuttall Art - I will be conducting a workshop on how to draw or paint the human figure with a live model. It takes place May 5th at Enchante` Gallery and the cost is $20 (to pay the male and female models and for use of the gallery)

I'll also be doing events like the West Branch Art & Wine Walk, Blast the Blues at Dean Arbour, Fabulous Friday's Art in the Street, and maybe another Art de Combat.
Posted by jasontheartist at 10:15 AM No comments:

I did this painting (11x14) of Ted Nugent for an event. It's still avaiable! 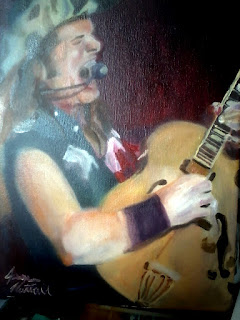 Posted by jasontheartist at 12:29 PM No comments:

This project's a few years in the making (it took a long time for the filmmaker to make me look interesting!), but Pauline Johnson of Detroit is making a web docu-series about my art. This is the first episode.

Posted by jasontheartist at 2:14 PM No comments:

I am still trying to set up an exhibit focusing on my Sammy Hagar series (part of my "Heroes/Inspiration" series)in Detroit that coincides with the Chickenfoot concert (the band that Sammy is currently part of), to share my view with other Hagar fans (REDHEADS!!!). I'm not doing it to make money because my Sammy series is "Not 4 Sale" (title of one of his albums and songs). It's more for the exposure but mostly just to give the Redheads a place to go prior to the concert where they can walk around, hang out and not be in a drinking environment. I know that alot of concert-goers like to get blitzed before the show even starts, and to each their own, but this would be a safer environment. I also think that it would be great to get a different group of people into whatever venue might show my exhibit, and give them more foot traffic.
I'm currently working on more paintings for the series in between commission work. Once I get more work done, I'll post it here and HERE only!
Posted by jasontheartist at 12:44 PM No comments:

Here's an 18x24 charcoal drawing I did of Alice Cooper, Michigan's own! Remember, all 18x24 drawings or paintings are $216 each. 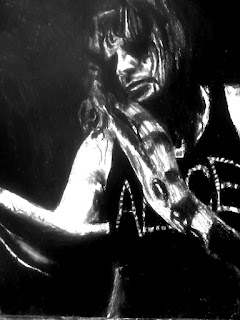 Posted by jasontheartist at 4:20 PM No comments: