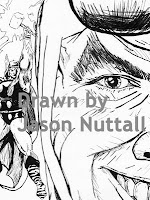 Above is a drawing I did of Marvel's Loki and Thor. I'm taking it with me this weekend to the XCape Con
in Flint. If anybody plans to attend, and would like a drawing such as this, email me ASAP and I can have it ready for you Saturday or Sunday at the Gateway Centre Holiday Inn.

Posted by jasontheartist at 11:01 PM No comments:

Me and The Duke at X Cape Con 2


I'm going to be bringing some of my fine arts pieces as well as my comic art to the X Cape Con. One of the pieces I might bring is this piece of John Wayne from one of my 3 favorite Duke movies, "The Shootist". I created a woodblock print from this drawing and will have that available. SO, if you're in the Flint, Michigan area November 22-23, swing by the Holiday Inn in Gateway Centre.
Oh, and I also have the Pete Townsend drawing up on Ebay again.
Posted by jasontheartist at 9:17 PM No comments:

Alright, kiddies! It has been announced that West Branch, Michigan, my hometown, will be host to the first West Branch Children's Film Festival! It is the first festival for kids in the mid/northern Michigan area. It will be a 3 day event, July 31-August 2, 2009. There will be areas around West Branch that will be playing movies for children, and movies BY children! This will be a VERY family-friendly event. There will also be professionals in the field of filmmaking to speak or give workshops or even present their own children's film.
At the time of this post, the Film Festival Committee is building a website, contacting filmmakers and local schools, and organizing. I am an unofficial member of the committee, as I am with the West Branch Film Initiative.
If you know of anyone who has a child-friendly film, or is making one, or knows of a youngster between the ages of 3-18, let them know about the WEST BRANCH CHILDREN'S FILM FESTIVAL. We are planning to make it an annual event and be a Cannes for Kiddies!
Posted by jasontheartist at 9:31 PM 1 comment:

I know it's been alot of back and forth, but YES I WILL be a guest at the X-Cape Con 2 comic and sci-fi convention in Flint, Michigan at the Holiday Inn on Gateway. Here's a link
www.xcapecon.com
The event takes place Saturday, November 22 and Sunday , November 23. I will have art on display and for sale, M.I.A. : Mime In Action for sale, doing sketches, taking orders and selling (for a buck or under) an EXCLUSIVE VIETMIME teaser. You can only get this teaser at the X-Cape Con 2, or order it from me here. You can also order a certain amount from me online and pick them up at the con, just to make sure I have enough printed up. It will be a limited printing.
And if you are a fellow GROOPER and plan on attending, PLEASE let me know ASAP!!
Spread the word!!!
Posted by jasontheartist at 12:56 PM No comments:

The West Branch Area Film Initiative, or Ogemaw County Film Initiative, is currently organizing and will have a website up soon! I am a member of the film committee, unofficially, and will try my best to keep updates on this great experience for West Branch. The goal is not only to get movies made in West Branch, but to bring jobs to the residents of Ogemaw County and to give the youth of the area a reason to come back home after college or during college. There is training available for film work and opportunities throughout Michigan. You can view some info on the Michigan Film Incentive, which is a tax cut for filmmakers shooting in Michigan, at www.mich.gov/filmoffice
I feel very strongly about this initiative in West Branch. Pete Fabbri, the lead organizer of the Initiative and co-owner of The Silver Lining in downtown West Branch, has told us that West Branch is in the lead for organizing for filming right now. No other town is as on the ball as we are, and we hope to keep it that way!
As soon as a site is up and running for the film initiative, I will provide a link.
Posted by jasontheartist at 12:29 PM No comments: