I am donating my Paul Newman drawing for a raffle at a fundraising spaghetti dinner for Sharon Karnafel, a friend of mine and the mother of a good friend of mine. She worked at K-Mart and Wal-Mart and is fighting cancer at the moment. The dinner takes place at the West Branch Masonic Temple next to the little league fields on Saturday, May 2 from 3-7pm. Tickets are $5 and raffle tickets are 5 for $1. The drawing is easily worth $200.
I started the drawing last Spring after Paul Newman passed away. I have not even finished the drawing, but this event has given me the perfect opportunity to finish it. I have been trying to figure out what to donate since I was asked to participate. Then it dawned on me: This is a worthy cause and Paul Newman, aside from being a cinematic legend, was also an honorable, charitable human being (Newman's Own dressing, popcorn, etc? Most, if not all, proceeds to go charitable causes). What better way to honor his memory and how better to help a friend in need?
Sharon and her son Steve have always been very close to me. I was at his wedding, he came to many of my art shows, and he was the first friend I made in Michigan after moving back from Colorado. He and his mother have had a difficult 10 years. I know no better way to show my support than by giving what I have to offer and to ask others to come for a $5 dinner for one evening.
Posted by jasontheartist at 10:30 PM No comments:

Artists' Pool second Get Together today!

Today is the second West Branch Artists' Pool Get Together, for those who couldn't make the first one or liked the first one or want to get info on upcoming events. So far, there will be 4 people there, five if you include someone's kid who's being dragged to it. I was hoping to get some interest from younger artists looking to find their artistic niche in the area.
The get together is from 4:30-6pm downstairs at the West Branch Library on N. 4th St. It's free and if you feel like showing your work, bring examples. If you have any thoughts on the arts, speak up. It's a free flowing, easy going shindig. John Burton, former art teacher at Whittemore-Prescott, is involved in beginning a Co-Op Art Gallery downtown called "artisan's alley". He will be onhand to answer questions. Tell yer friends and neighbors!
Posted by jasontheartist at 9:57 AM No comments:

Email ThisBlogThis!Share to TwitterShare to FacebookShare to Pinterest
Labels: get together, west branch artists pool.

The Blues Were Blastin'! The auction, not so much...

"Blast the Blues" went as well as most events where artists display their work for sale. The event itself was fine. The organizers did a good job, and the band, The Devilles, were great. It's just the people who PAID to be in a FUNDRAISER involving an AUCTION didn't feel that they should have to bid on anything at the auction. Alot of artwork was up for auction. Attendees knew this. It was advertised. But nobody wanted any artwork. Or anything else, other than eat and drink.
Now I understand that alot of people aren't into art, no matter what kind of art (and there was a great variety), but if you come to an event that is a fundraiser that has an art auction and artists on display (as advertised), MAYBE you shouldn't be coming if you don't like art.
"Let's go to a car auction even though I don't have a license and hate cars! But I hear they're giving away hot dogs!"

I want to make clear that the event organizers, volunteers and artists are not the people I'm disturbed by. It's the people who paid to come to charity auction and didn't want to bid. I did not expect to sell anything. I never do at these things. It just gives me a chance to show off my work. I'm not upset that I didn't sell anything. It's that people donated artwork, events, opportunities and their items were underbid (start at $50 and EVENTUALLY sells for $25). To me, that's a blow to the self-esteem. It's not a garage sale that you meander around and try to haggle.

That should be enough complaining for now.
Posted by jasontheartist at 9:45 AM No comments: 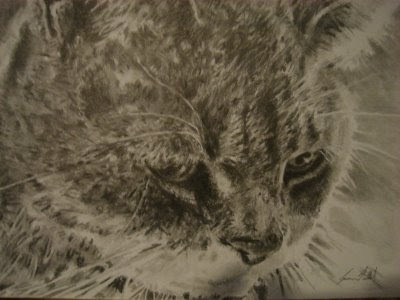 I just finished this graphite drawing of my friend Jenny Raymond's cat for her. I gave it to her yesterday and she says she loves it.
Posted by jasontheartist at 4:40 PM No comments:

The Art & Wine Walk went very nicely. It was great weather and alot of booze lovin' West Branchers out and about. As always. But this time there was FREE wine and artwork to look at.

Oh right. There was artwork on display. I actually had people come into the Ink & Thread, get their shot o' rotted grape juice, give me a look like I was a diseased hippie and walk out. Par for the course. Happens all the time. And for the record, I am NOT diseased. I am not a traditional "hippie". I have long hair and listen to classic rock and blues. I don't hug trees. I don't spout off "Peace my brother", and I do not partake in ANY Hippie-esque substances. Hell, I barely drink.
Other than those individuals, the evening was great. I saw old faces, new faces and had alot of positive feedback about my artwork.
Next Thursday, April 23, I will be at the "Blastin' the Blues" at Dean Arbour in West Branch, for the Tolfree Foundation. I will have artwork on display, as will 19 other artists. Entry is $20 and that covers food from multiple local restaurants, drinks and a chance to bid at the auction. I have put a BB King block print up, an unknown piece (but it might be a Stevie Ray Vaughan painting) and 3 hours of art lessons. For more info, check out the Tolfree Foundation site: http://www.tolfreefoundation.org/blasttheblues/

Spread the word!!
Posted by jasontheartist at 9:43 AM 1 comment:

I will be at the Ink & Thread for the West Branch Art & Wine Walk on Saturday, April 17th from 5-9pm. I will also be at the Blastin' The Blues for the Tolfree Foundation at Dean Arbour in West Branch on Thursday, April 23. Gotta get to work, but hope that holds ya for now...
Posted by jasontheartist at 10:52 AM No comments: