I've been away for a bit. I've been teaching at the Midland Center For The Arts (where I'm scheduled to teach again in October if you have kids in the Midland area interested in drawing cartoons) and my internet is currently out at home, so I'm not online much anymore.
NEW ANNOUNCEMENT:
I know it's not common for people to write about applying for a job, but this is a job I've dreamt of my entire life and never imagined I'd get the opportunity to try out for it. Having said that, I have sent in example artwork in hopes to get the gig of artist for the upcoming POPEYE comic book being published by IDW Publishing next year! I didn't know they were even looking for the creative team, until a friend (who shall remain nameless to protect his innocence)wrote me that he thought I should give it a try and contact the editors. Let's just say that having this friend recommend that I try fot the gig is such a huge compliment and honor that if I don't get the job, I'll have the gratification that this man thought enough about me that he thought of me.
I sent the examples in (although the photography of the examples were crappy, and it may reflect poorly on me) 2 weeks ago and was written that I'll hear from the editor if they hear anything.
So, if you know the editors I'm referring to, maybe you can subtly suggest me?
Posted by jasontheartist at 5:01 PM No comments:

View it, love it

If you want to go through the artwork from this blog, just click on the slideshow on top of the page. If you're looking for a certain subject, just type into the search in the top left corner.
Posted by jasontheartist at 12:22 PM No comments: 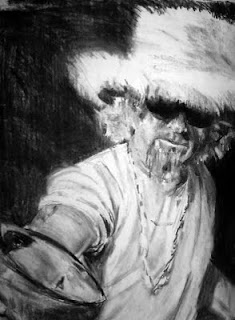 Prices are going back to normal this Saturday, so if you like any of the work here that's marked down, act now! You can see some of the artwork on the link below- ARTWORK ON SALE!

Remember that original artwork is a great gift for others or just yourself!
Posted by jasontheartist at 11:20 AM No comments:

We're THERE, but not really all there, ya know?

The goal has been met and the project is a GO! However, if you've been following, my first attempt to raise funds was for $1500. This time it was $700. Less than half of the original goal. $700 is a bare minimum of what I need for this project, so please pledge and keep spreading the word by sharing this blog and/or the Kickstarter link to your friends! The original goal was carefully figured out to ensure all materials and space rental was paid on to continue. With the new goal, I have to pick and choose what I can and can't do. CLICK HERE to view what you get if you back the project!
Posted by jasontheartist at 8:44 AM No comments:

I'm trying Kickstarter again, but this time, I've lowered the goal and reduced the deadline to 5 days. I'm asking people who like my artwork to either back the project (minimum pledge of $2) or at least spread the word about it. You can get more details and pledge HERE
When you pledge, you DO NOT get charged! If the goal is met and the project is successful, THEN you get charged. And it's all-or-nothing: If the goal's NOT met, I get nothing. If the goal's met, I get funded (and if the goal is met and people keep pledging, I get that, too).
Posted by jasontheartist at 9:02 AM No comments: