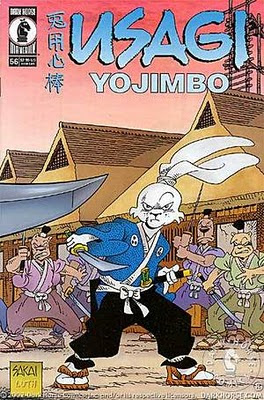 It's just been announced on the Motor City Comic Convention website, http://motorcitycon.com Stan Sakai has been added as a guest. If you've been reading my blog, you know that I met Mr. Sakai the last time he was at the con,and HERE is the link to that post.
Stan Sakai celebrated the 25th anniversary of his creation, USAGI YOJIMBO in 2009. He is also the letterer for GROO THE WANDERER and has for 28 years now (of course, not EVERY year.Just the years they were making the book). He is also the letterer of the Spider-Man comic strip, where he works with another Stan, Mr. Stan Lee.
Stan Sakai is a highly regarded cartoonist and a very generous and kind man. I felt a sort of kinship with him when we met, and hope I haven't driven him nuts over the past couple years since meeting him, as I still feel that connection and hope it continues.
Posted by jasontheartist at 9:57 AM