If you don't already know, Van Halen was MY FAVORITE BAND. Sammy Hagar is still my favorite musician, but I wouldn't have discovered the Red Rocker if it wasn't for VAN HALEN in 5th grade. That's when I discovered music as an important part of my life. Anyway, you can read a bit about my VH obsession and Sammy Hagar obsession HERE and HERE.

I'm not much of a watercolor artist, so I'm leery of making a photo realistic project out of watercolor. But, I had a successful watercolor piece recently and got cocky. Plus, the death of Eddie Van Halen in October 2020 still felt fresh and surprisingly hard to shake. I knew I wanted to do a portrait of Van Halen as a whole (with Sammy, that is. THAT is MY Van Halen. I loved all VH, but like the one offspring in every family, I liked David Lee Roth less). I went through countless images of the band, planning on drawing them in graphite as I appreciated them, as I remember them. It was going to be black and white,and I was doing a colorful oil painting of Eddie and Sammy jamming on stage.

But, once I got the confidence after that little watercolor painting, my mind was set: large, colourful Van Halen tribute in watercolor! I started a NEW search for an image to work from, and found one that was burned into my memory from sophomore year in high school: 1993 Whiskey a-Go-Go concert VH played to celebrate the 25th anniversary of the band playing that venue. It was staggering how the streets around the club were flooded with fans! Police werethere, helicopters and reporters swarming! News reports across the nation covered the hysteria. I was SO jealous because I couldn't be there. But I did see them later that year at Pine Knob Music Theatre in Clarkston, Michigan!

This painting is the BIGGEST watercolor painting I've ever done (before this, I did some 9" x 1 2" illustrations ) at 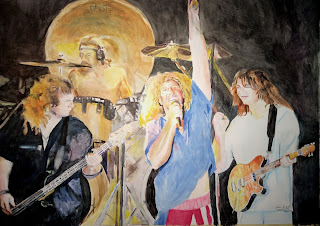 Posted by jasontheartist at 11:32 AM

Thank you. A portrait I painted of my favorite band