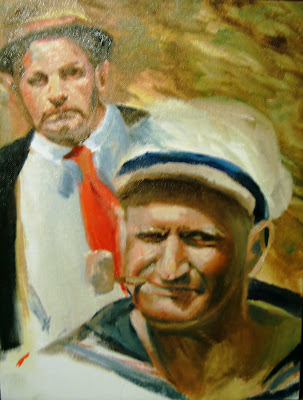 This is the first piece of my Popeye series. This is a photo of the unfinished oil painting. I love Popeye. It was the first thing I remember drawing as a kid, and this movie is one of the first things I remember seeing. As I grew older, I began studying Popeye's history, and found that the 1980 movie, with the exception of the musical numbers, was pretty accurate to the EC Segar comic strip of the 20s and 30s. Hell, the musical numbers actually pay homage to the Fleischer Studios Popeye cartoons too.
I've been doodling Popeye my entire life, but I wanted to do Popeye as I can. I've done my comic book style of Popeye, but my artistic focus is in portraiture. So, I decided to do a series of Popeye artrwork based on the live action movie. I'm also working on a graphite drawing of Popeye and Bluto simultaneously.
Feels good. Feels right.
Posted by jasontheartist at 7:35 PM