Not so easy Easy Rider

This is a work in progress. I've been working on it off and on for a year as part of my Jack Nicholson series. I originally chose this image because I was told by a gallery associate that I should do scenery or landscape pieces because that's what sells in their gallery. This was as close as I could get! I always lean towards portrait of figurative work. I did say that I wouldn't do the classic Jack images, and this one is one of the first iconic scenes of his career. But, It's also 36x48 and graphite, so it's a challenge. It also has personality to it. The stern, determined expressions on Nicholson and Fonda's faces along with the precision of the chopper details is very serious, and then you look over and the expression on Dennis Hopper's face,and the fact that he's looking back at the other two breaks through the stern scene and adds charm (As I began drawing Hopper's face, news broke within days that he passed away,making this drawing mean more to me).
I will not post a better photo of this, or any other photo, so if you want to see it, you have to visit it at the studio. 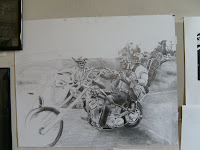 Posted by jasontheartist at 10:04 AM