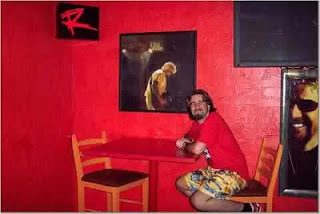 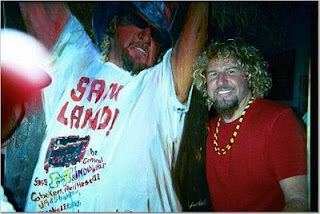 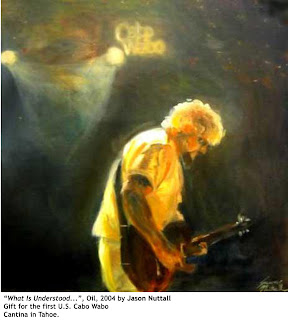 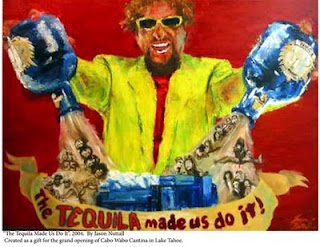 As some of you may know, I am a fan of Sammy Hagar. Let's just leave it at that.

Well, in 2004 Sammy opened a Cabo Wabo Cantina, based on his club in Cabo San Lucas, Mexico, in South Lake Tahoe at Harrah's. As the first US based Cabo, I wanted to show my appreciation of the music and spirit of Sammy and Cabo by painting a series of paintings of Sammy. One was from a fan club called Sam~Land that I am also a part of and the others were from me and ONLY me!!!! HAHAHAHHA!!!

Anyway, one of the Redheads/SamLanders, Michigan Mike, took the paintings to Tahoe on my behalf and with the assistance of another fan, handed Sammy the paintings. They now hang in the "Red Rocker Room" and I have seen since then photos of the paintings still. I have decided to make prints of two of the three and they are now
here .

Above are images of the paintings at the "Tahoe Wabo", one with Sammy with the SamLand painting, and a pic taken by a fellow Redhead of Aaron Hagar in the "Red Rocker Room" under the "What Is Understood..." painting!
Posted by jasontheartist at 11:14 PM